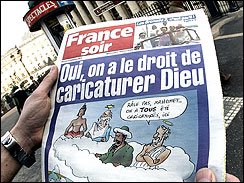 The cover of today's France Soir with its reprint of one of the contentious cartoons upsetting Islam. This one is probably the better of the set - the "forbidden" iconic image of Muhammed is accompanied by those of Christianity, Judeaism and either Hindu or the Budda. The detail is unclear. In a modern world such cricticism, albeit through characture, should be a matter of open discussion. The fact that most of the cartoons in question happen to be of poor editorial quality is another issue entirely. Altogether, a lot of fuss about virtually nothing. Of more concern should be the aquittal in court today of the BNP leaders who were clearly guilty of promoting intolerance and cultural agitation.
eTV Picture Post
Posted by Mal Burns at 11:06 PM